The Real Danger Isn’t the Coronavirus 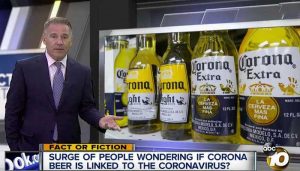 What freaks me out more? The coronavirus or people’s reaction to it?

A couple of weeks ago we were joking about how sales of Corona beer were tanking because people thought it was causing the coronavirus. That joke has gone out the window, as the insanity continues to escalate.

Tuesday, March 17, the stock market dropped nearly 3,000 points. Much of that was recouped the next day.

Grocery stores have gone bananas. Today, at 7 a.m., the line was out the door at the local Safeway. I’ve never seen a line out the grocery store in my life.

Want toilet paper? Good luck. It’s replacing cigarettes as the new black-market currency. A man was overheard saying, “Hey buddy, I’ll trade you a carton of smokes for a roll of Charmin.” It wasn’t even a roll of Scott, which has six times more toilet paper per roll. It’s insanity I tell you.

Jokes aside, the CDC’s website reports that according to a new poll – conducted by NPR, PBS News Hour and Marist Poll – 1 in 5 people have either lost their jobs or are working reduced hours. US Secretary of the Treasury Steven Mnuchin said that we’re looking at the possibility of 20% unemployment.

The White House is making it all worse with inconsistent communication. They flouted the CDC communication guidelines that advised public officials communicate clearly, consistently and transparently. First, they said, “it’s a liberal hoax.” After the stock market nosedive, they announced a $1 trillion stimulus package. As of this morning, they are claiming, “this is war.”

It reminds me of 2001 when three thousand people died in a terrorist attack. This was nothing compared to the 400,000 that die every year from tobacco, or fifty thousand dying from gun violence. Suddenly we were fighting a “war on terrorism”. Fifteen years later that war hasn’t been won and most of us have to get full-body scans at airports.

In short, what scares me more? The virus or the people’s reaction it’s perceived threat? I think it’s pretty obvious where I stand. Obviously we should. We have no choice given what happened in China and Italy. There is no way to know what is overreaction and what is not, but it’s clear that people are deeply afraid.

It reminds me of the time I was almost trampled to death in a stampede at a concert in Paris, and there wasn’t a damn thing I could do about it. A little girl fell down, and we were all forced to pig pile on top of her. Everybody ended up being okay, but it was ugly.

The same thing is happening here. All I can hope is that I won’t fall down and get crushed in the madness.

In the meantime, remember to breathe deeply. It will calm that fight or flight impulse down, so you can think more clearly and formulate a plan.

And if you have any rolls of Scott toilet paper, let me know. I got smokes.