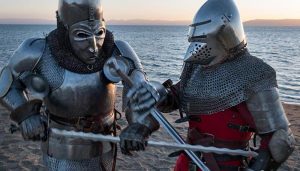 I have been studying reconstructed swordfighting techniques from medieval manuscripts for eight years. It’s a great workout, and incredibly fun. I practice both unarmored and in historically accurate armor. You know, as in “knights in shining armor”…

When I told Donovan what I do in my spare time, he suggested that he film us fighting on our local beach to help promote the sword school I was getting ready to open here in Alameda, before Covid hit.

The Witcher had just come out on Netflix, so two discussions were raging on the interwebs: How realistic is the Witcher’s pirouetting fight style? And can women fight with swords? This video was an opportunity to answer both questions.

I train with Davenriche European Martial Artes School (DEMAS) in Santa Clara, California. We practice the Italian school of longsword, but also use other weapons. Our primary source of information is a manuscript that was written by 70-year-old Italian swordmaster named Fiore dei Liberi. His manual, Fior di Battaglia—“The Flower of Battle”—illustrates a system for fighting in or out of armor. Fighters can be unarmed or armed, using either a dagger, sword, or polearm.

I am female, 5’6”. My armor weighs 60 lbs, and my 3.5-pound longsword is heavier than most. Yet, I still defeat men who are much larger and stronger than me, because swordfighting isn’t about brute strength. It’s about angles, balance, and timing.

These are all key to performing a bit of footwork Fiore calls a tutta volta, or full turn. This could be interpreted as a way to quickly turn 180 degrees in a swordfight, but there’s the rub.

Fiore is even more succinct than usual when describing the tutta volta: “a full turn is when you circle one foot around the other, one remaining where it is while the other rotates around it” (Colin Hatcher translation). Some medieval swordfighting schools interpret this as a move akin to the Witcher’s pirouette. Others disagree. Brian Stokes, a specialist in interpreting the artwork of these manuscripts, describes a more limited motion to turn the foot and realign the body behind the sword.

We had a discussion at DEMAS about whether one could even execute a 180-degree turn in armor, and why a fighter would ever choose to do that.

The answer is that mostly, you wouldn’t. Why on earth would you turn your back on an opponent? Rotating—pirouetting—takes time, and time can cost you a limb or your life in a swordfight (or, a point in your tournament bout). It could also easily throw you off balance, again leaving you vulnerable to an attack. In conclusion, even though you wouldn’t do this in real life, it looks great when the Witcher does it.

So when is it time to tutta volta? Imagine you have just dealt a disabling blow to your opponent, and hear armor clanking up behind you. His pal is trying to backstab you. You need to turn around as fast as possible while keeping your balance.

By lifting your foot and shifting your weight, you can make the turn in time, and be ready to fight. This elegantly simple move takes you offline from your opponent’s sword trajectory, maintains your balance, and requires little energy. Used as a turn to place your body behind your blade while still facing your opponent, it’s an excellent tactic. Used as a turn to meet that rush from behind, it’s a lifesaver.

And yes, you can do it in full steel armor, without losing your balance, as I illustrate in the above video.