How to Win, Even When You Lose 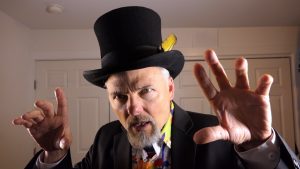 Last night I won, even though I lost.

I had been competing in an International Speaking Contest, and last night I got trounced.

Late last year, I quit a secure job I had for nine years as a webmaster/videographer to do something “more challenging”. Silly me.

I got more than I bargained for, as we do when we take the Fool’s Leap. But I had to do it. I wanted to find a different career path and future-proof my job. Tech changes at an unrelenting pace, but people don’t. That’s why I chose to focus on improving my communication skills. Like most people, I find public speaking difficult, even though it’s one of the best life skills you can practice.

So I joined Toastmasters, in January, and began competing in an International Speech Contest. My goal wasn’t winning the competition. That was a long shot. It was stepping as far out of my comfort zone as I could, to accelerate my growth as a communicator.

The theme of my speech was “step outside your comfort zone because that’s where the magic happens”. The first half was a comedy skit with four superheroes, and the second half was about how I was using the alchemical process to turn the ordinary into the extraordinary. The speech was ambitious as I could make it. If you’re going to step outside your comfort zone, you might as well step as far out as you can go. I did this by tapping every skill in my communications toolset, including magic, comedy, and voice acting.

When I competed the first time, it was in front of a room of more than 20 people. My speech started with “Fellow Toastmasters, I am a magician, and tonight I would like to show you how to bring real magic into your life”. Eyes locked on me, and for the first time ever I really felt the mythical “energy of the room”. People laughed at my jokes and loved my punchline. It was amazing, and it felt great to win that round of competition.

Then life threw me the Covid Curveball, and all Toastmaster meetings moved to Zoom. Okay…I was getting a twofer. I could handle this.

I had been practicing in front of a live audience. Now I had to talk to a camera. I wouldn’t be able to hear my audience’s laughter, because everybody had to mute their mikes when the primary speaker talked. Likewise, all that practice I had done making eye contact wouldn’t matter, because there was nobody to see. I was now performing to a mirror image of myself on the computer screen. Additionally, all the skills I had been practicing for speaking in front of a live audience on a stage wouldn’t work anymore, because I would be confined to a 5’x10’ area in my home office.

Fortunately, I had good experience prepping a space like this. I learned a lot about lighting as a videographer, so I lit my office up for performing on stage for a camera. Most Zoom speakers present in a poorly lit room, and either sit or stand in one place. I began practicing moving around to maximize the whole space and weird perspective a camera affords. Clear facial expressions are important on Zoom, so I put on stage makeup and practiced using facial expressions and hand gestures. All in all, it was great experience for a YouTube production. I did this all of this, as I ramped up my practice schedule.

My talk was 5-7 minutes, which meant I could give it about six times an hour. I did this 1-2 hours a week for five weeks, as I tried to get stage time. Nothing is more important in public speaking than practicing in front of a live audience, so I kept giving my talk to Toastmaster clubs on Zoom.

All in all, I’ve done the talk over fifty times to myself and at least twenty times to a club audience. Man did I grow, thanks to my fellow Toastmasters’ constructive feedback.

On April 4, I began the second round of competition at 7:45 p.m. I gave the speech to forty-some people, none of whom I could see. Everything went well. I stepped into my well-rehearsed speech. It was hard to be “vibrant and energetic” an hour before I was supposed to go to sleep, but things went well.

Then Jana began her speech. She spoke with a Russian accent, was wearing a pink dress, and holding a bouquet of flowers. She told a tale of growing up in the Soviet Bloc, where everything was grey. As travel restrictions slipped, her parents were finally able to travel to the west. They were blown away by how colorful everything was.

A short time later, her mother lay dying on her death bed. She told her daughter that there was a Christmas present under the tree and that she should open it right away. “Don’t wait for Christmas”. So she opened the present. It was a vibrantly pink dress.

Yup, that’s right. It was the same one Jana was wearing even as she spoke.

When I felt that knot well up in my throat, I knew I was toast. There was no way I was going to beat this story.

When Jana told about her mother passing away, she sang the verse “Hello darkness my old friend”, from Simon and Garfunkel’s “Sounds of Silence”. She wrapped up her story with a call to action. She held out the bouquet and told us to choose a flower color and wear that color out into public, to bring more happiness into our Covid world.

It was a great speech. There was nothing I could have done to beat her. She had basically dropped the Tsar Bomba on me, and I was okay with that.

It wasn’t like I had lost to a shmuck. I had lost to a talented opponent, and more importantly, to a great story. Even though I didn’t get to the next level of competition, I got a lot farther than anybody else. And I achieved my real goal, which was to step outside my comfort zone as far as possible.

I had grown leaps and bounds and learned a lot along the way. Here are some of my takeaways:

I pushed myself to the limit, and that’s all any of us can do. I stepped way the hell out of my comfort zone, and that personal growth was priceless. Now I’m a better person for it.

And that how you can win, even if you lose.

I’d like to give a special shout out to the Windmasters, Tongue Twisters and Coastmasters Toastmasters Clubs: I love you guys! You are real human beings trying to support each other, and become better communicators. It takes tremendous courage to make mistakes in front of your peers, and learn from them. Thank you for being so supportive.