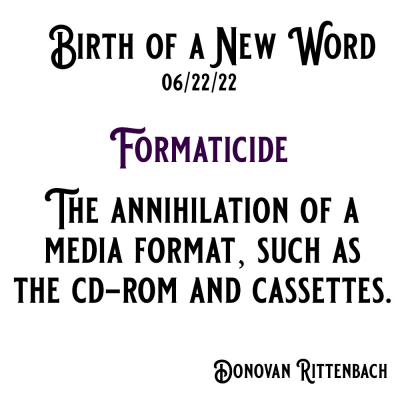 Friends, it’s New Word Wednesday. Copywriters make up new words to explain things for which there are no existing words. Here we go.

Formaticide is the utter eradication of a media format by a “”a new and improved” media. I.e. one that’s impossible to share.

You could make a cassette mix tape and share it. You could give a friend your audiobook on CD-ROM or rip it to MP3s and share it. That’s why the industry wanted to make those formats extinct.

1) I own (can hold it in my hand) hundreds of DVDs, and couldn’t just throw them away. Now I don’t have to “buy” them again online.

2) You won’t be able to watch streaming videos in the apocalypse.

3) And I can watch classic movies that haven’t been digitized, i.e. Casablanca or The Lost Skeleton of Cadavera.

On Sunday I watched “The Fifth Element”, to celebrate its 20th anniversary. I watched it on DVD.

As long as I’m here, you’ll still have a place in the world.

Copywriting Has One Purpose
Scroll to top Menu