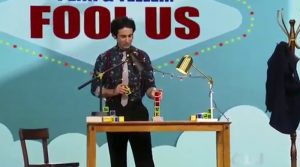 I am going to cast a spell on you. It will shift your perspective and change how you think about the innocuous word “spelling” and change how much you value the art of writing.

Every time you write something and share it, you are casting a spell. Literally. People cast hundreds of millions of spells every day when they send text messages or emails. Because the spells are so short, poorly crafted ones cause confusion at best, and conflict at worst. Let me give you some examples of the power of spells.

The right words can begin or end a relationship. A heartfelt thank you note can build a relationship. The magic word “please” can get what you want. A short, curt email, especially if it doesn’t use emojis, can freak people out. I’ve destroyed relationships with poorly crafted emails, because I didn’t respect the power of a few simple words to invoke the wrong story in my recipient’s head.

Stories are the most powerful spells you can cast. They literally (pun intended) shape the course of history. The stories of Jesus, Mohammad and Buddha certainly did. J.K. Rowling cast one hell of a spell. Her spells made her the first billionaire author and a major cultural force. No movies, TV series, radio shows, plays or books would exist if we didn’t have scripts.

The advertising world would be nothing without spell casters. Time Magazine called David Ogilvy, “the most sought-after wizard in today’s advertising industry because of his copywriting skills. People like him get paid big bucks to craft spells that stick in your head, like “Just do it” or “Coke is it.” Their carefully chosen words build brands that sell tens of billions of dollars of consumer products, but don’t hold a candle to the spell of law.

Law binds our nation and keeps it from descending into chaos. It governs international trade and begins or ends wars. With a couple of well-crafted sentences, lawmakers formed the 15th amendment and set the groundwork for monumental power structures of multi-national corporations. Lawyers get paid $1,000 an hour to create perfectly clear documents with letters and words placed in exactly the right order with exactly the right meaning.

These examples are just the tip of the iceberg. We haven’t talked about the power of mathemagical spells to make nuclear bombs and put people on the moon. Nor have we discussed how the language of computer code gives us complete control over the machines that are so integral to our daily lives.

Still, I hope I have changed how you think about spelling and helped you appreciate the awesome power of choosing just the right words.

If you learn to craft your spells well, you will open the door to untold success.