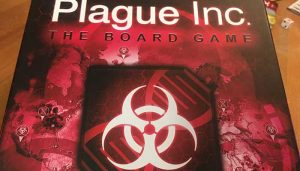 My brother called to tell me the lines were insane at Safeway, and you could only buy five things at Trader Joe’s. Bed Bath & Beyond was empty except for four people.

I had just been to the local pharmacy. They were completely out of toilet paper, Lysol and chocolate. Curiously there was plenty of Kleenex. I guess people just weren’t thinking outside the box.

It sounded like the perfect theme for our monthly game day, so I busted out Plague, Inc. and Pandemic, my all-time favorite cooperative board games.

The Premise: Plague, Inc. is based on the wildly popular video game that sold 85 million units. It is a fabulous education game, and a great way to talk about evolution, geography, and pathology. 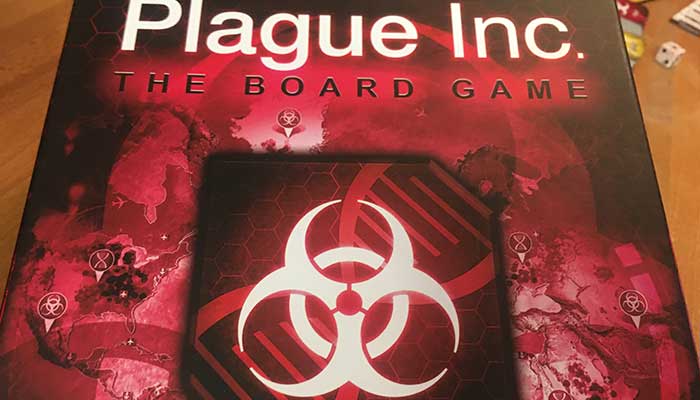 The way you win is by infecting the whole world and causing a complete meltdown of civilization. If you are too deadly, and not virulent enough, you’ll quickly kill die off like ebola. If you want to survive and thrive, you need to evolve new ways to transmit your virus to maximize your virulence. When you have infected enough people, then you evolve to become lethal.

Game Play: The board game is similar. Everybody starts as a bacteria, which gives them 1 DNA point. DNA points are how you buy new traits. 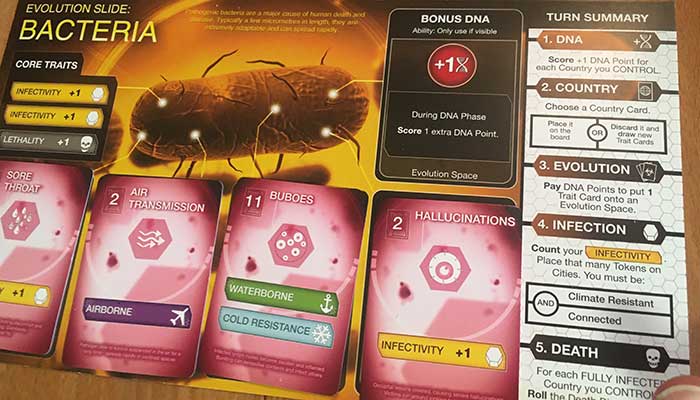 Everybody gets five trait cards to start with. You will evolve these to make progress.

Then draw a country card. Put it down on the board, and infect it if you can, or discard it to get a whole new hand of evolutionary traits. This is the best way to evolve quickly.

The more countries you infect, the more DNA points you get. That makes it easier to buy new traits that increase your rate of infection or lethality. 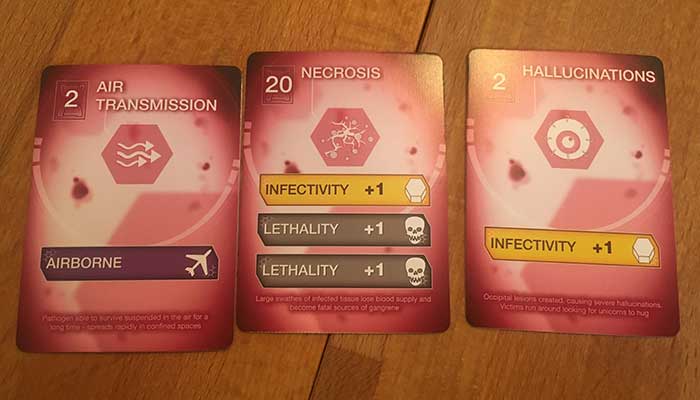 It’s critical to get key traits quickly. You need to traits like temperature resistance, or airborne transmission. These will help you spread through airports, seaports and get into cities that are in cold or hot climates. Then you can increase your rate of infection with traits like coughing and sneezing so you can maximize the number of countries you’re in.

Every country has cities to infect depending on their population. If all city squares are infected in a country, the dominant strains have to try to kill it rolling a blood-spattered six-sided dice. They compare the result to their lethality to determine if they kill the country. 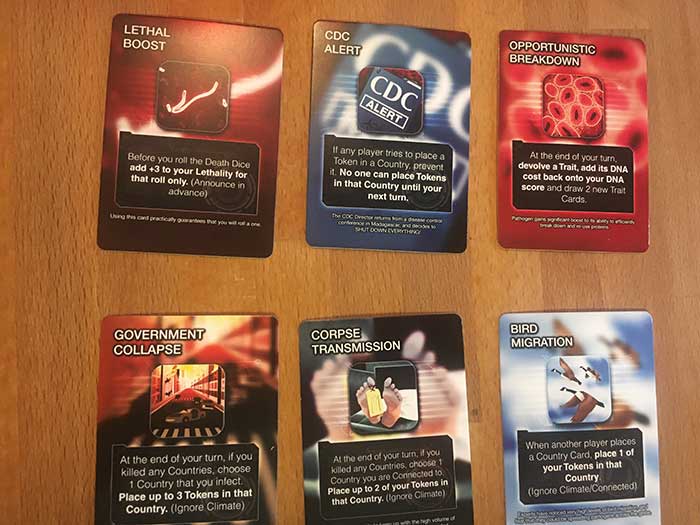 It can be hard to know when to do this because if you kill the country it will reduce your DNA points. If you kill it though, you get an event card. These can be played at any time to help you or hinder opponents. For example, a CDC alert can lock down a whole continent and keep competition from spreading.

The Fun: Certain countries were highly topical. For example, Italy was one of the first countries to get wiped out. France and Ukraine were big battlegrounds. When Ukraine was put down, it became Mykraine. As other people invaded it, it became Ourkraine. There are tons of traits. The more powerful traits cost more DNA. Some of my favorites were necrosis, cannibalism, and buboes. These are pustules that break and are highly infective.

The event cards had lots of funny capabilities and kept things interesting. Some of our favorite events included Toilet Paper and Nuclear Attack.

One downside was that we had a runaway leader.  He managed to get way ahead of the other players. That meant the last ½ hour then became a slog because everybody knew there was no way to catch up. Good games need to be suspenseful all the way to the end. Hopefully, this will be resolved as players play this again. 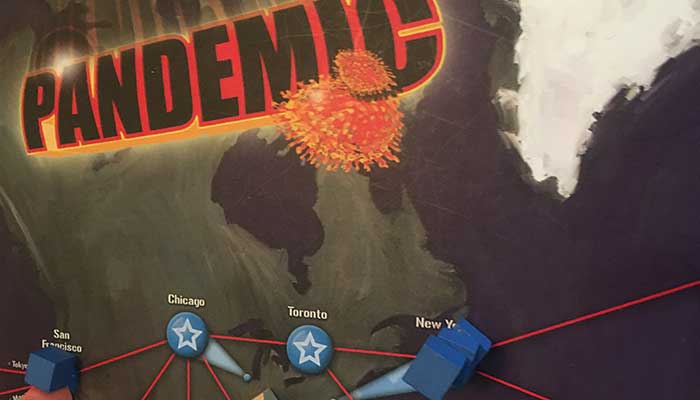 Pandemic is my all-time favorite game for a few reasons:
• It’s a cooperative game, which means that everybody wins or loses as a team.
• It builds key social skills like negotiation and group decision-making.
• The narrative is very strong. You feel like you are in the middle of an outbreak.
• It’s packed with nail-biting tension. Every turn has some new and exciting drama, as you race to find your four cures before the world collapses.
• It’s a great way to learn or refresh geography skills.

The Premise: You are a crack CDC team trying to cure four major disease outbreaks before the world collapses.

Gameplay: First, chooses their role, like the operations expert who can build research stations, which are critical to finding cures and traveling. They place their player token on Atlanta Georgia, where the CDC is headquartered. 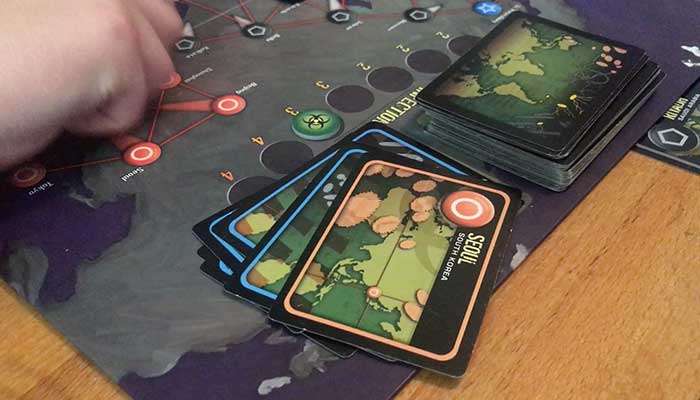 Then you draw 3 cards and infect them with 3 cubes. No city can have more than 3 cubes of the same kind, which means those cities are teetering on the edge of a major outbreak. If you have too many outbreaks, you lose. Then you then draw 3 cards that you infect with 2 cubes and 3 more cards that get one cube. These cities are your hot zones. You will have to keep an eye on them for the rest of the game because they will keep popping up like a bad dream.

Each player then performs up to four actions during their turn, which include moving to new cities and curing disease. 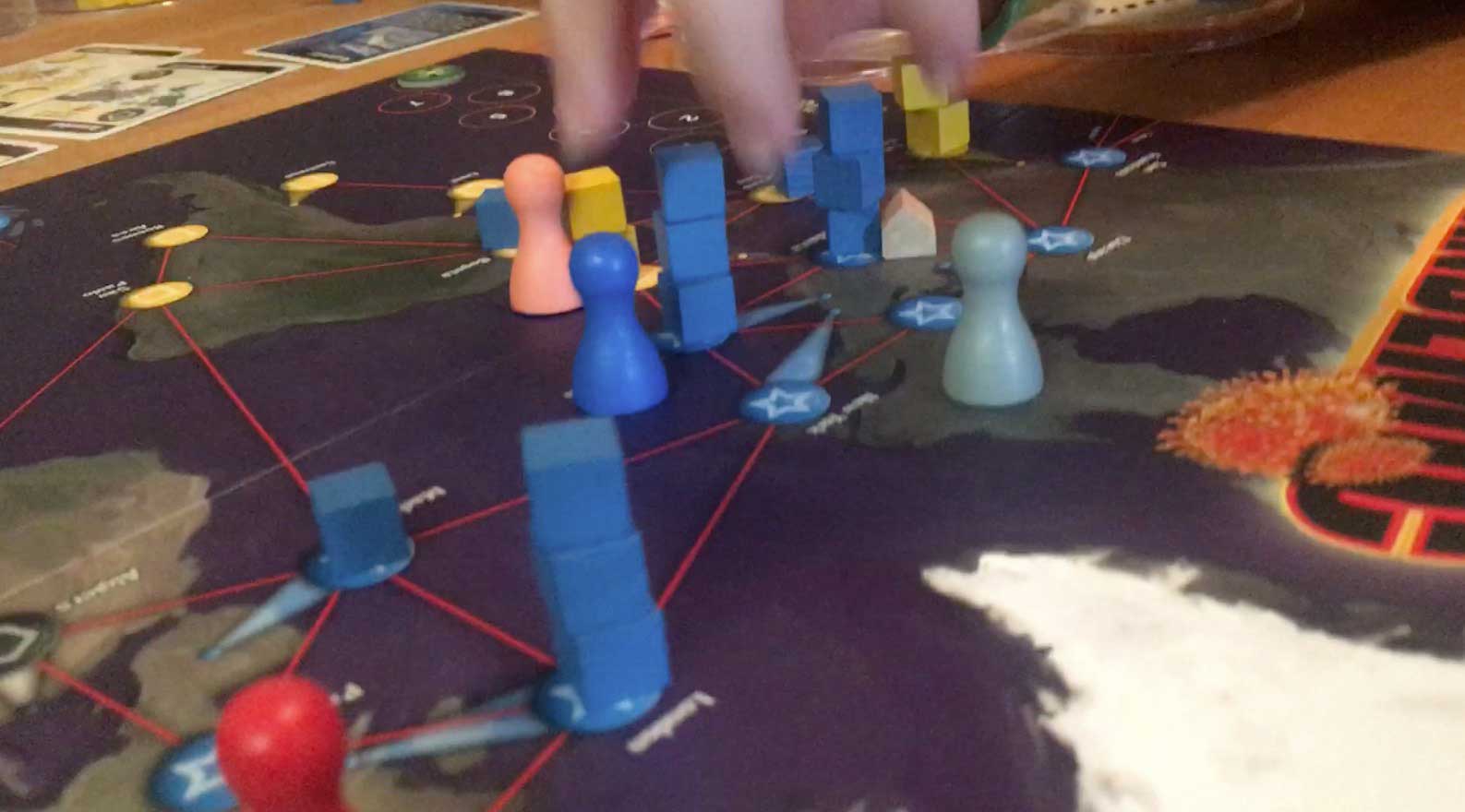 After they take their turn, the player draws two country cards. These can be used for taking flights around the world or finding a cure.

The final step in a turn is to draw two new cities from the infection pile and infect them with 1 cube. As the game progresses, you will draw more epidemic cards which will increase the number of infection cards that are drawn every turn, with a maximum of four. If you get to this point, you are about to lose. 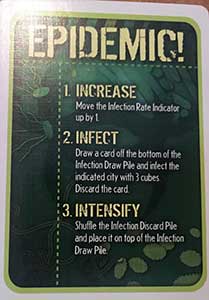 Drawing a country card is always filled with tension because that pile also has at least four epidemic cards. Whenever one of those is drawn, the epidemic amplifies and you get a new hot city filled with three cubes. You reshuffle the infected cities and put them back on top of the infection pile.

Every player repeats this sequence of steps as you race to find cures. There are lots of decisions to optimize your effectiveness and contain the illness.

The Fun: The best thing about co-ops is that you all win together or lose together. That means that the mentat won’t be able to dominate. They will have to practice their social skills and work together with others.

This is hard for young males who either tend to be quiet or domineering. That’s why women tend to excel at this game. They are often an essential part of the team because they naturally have better social skills and they tend to think out loud. These are key traits for making group decisions.

Advanced players who win have learned to make better group decisions and value everyone’s input. They have become flexible, inclusive negotiators who are great at spitballing ideas and working out the problem as a team.

Case in point, this crew of newbies lost in the first half-hour. They also lost the second game, although they had begun communicating better. They came close to curing the fourth disease but drew an epidemic card that pushed them over the edge.

I look forward to seeing how Plague, Inc. works out in the future. Maybe better instruction will get everybody on board with the strategy sooner.

You can never go wrong busting out Pandemic. It’s awesome and is considered a classic with board gamers. Next time we’ll include the mutant strain and eventually, we work our way up to the bio-terrorist expansion.